WhatsApp video calls are long coming since news surfaced on the web few months ago but now it seems the messaging is finally adding voice call menu. Phonearena reported that some iPhone users who denied microphone access to WhatApp have got a new pop up picture that shows three different icons one of them being a classic phone sign. 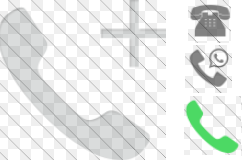 Although rumors about WhatsApp voice calls have been doing rounds since April and even WhatsApp CEO Jan Koum confirmed the news a while ago but he set no launching date. Most probably the voice call feature is still under testing stage but its unusual appearance in the functioning App clearly suggests that WhatsApp voice call are just around the corner.

The new calling feature will enable the top messaging to compete with rivals like Wechat and Viber that allows user to chat and call through one single app.  WhatsApp raised eye brows of many tech gurus when the social media giant Facebook bought the messaging App for whopping $ 21.8 billion earlier this year.


Many doubted that Facebook acquisition will ruin the not so social phone messaging App but social media major promised that it has no such plans. However, after paying such hefty amount for WhatsApp Facebook must be looking into ways to earn from this anti-advertising app.

Currently, WhatsApp is available at both Android and iOS for free one year trial and users pay $.99 to continue using the service every year. Though there is no official word on the pricing details (if any) for the voice calling feature but most probably Facebook would like to see it generating some real revenue for the company.