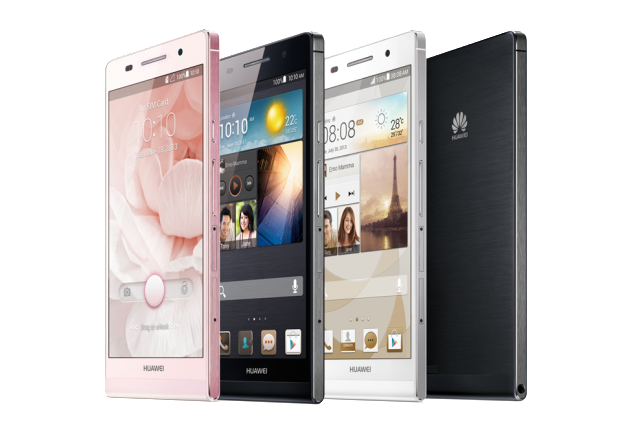 Huawei the Chinese mobile company has finally launched the world’s slimmest smartphone Ascend P6 in India. The android based stunning Ascend P6 has received global praise for its sleek metallic design that makes it stand out among most plastic made Android. This showstopper from Huawei looks stunning and solid in hand and despite it metallic body it comes cheaper compare to its plastic body rival androids. The retail price of an 8 GB model of Ascend P6 has been set at Rs 29,999 but you can find the smartphone for around 26,000 in online stores.

At merely 6.18 mm Ascend P6 is as thin as a smartphone can get, it has a silver metallic rim and trimmed edges that make it easy to hold in hand. The phone weighs about 120 gram and comes in three colors black, white and pink.

Ascend P6 sports a 4.7 inch display screen that has a resolution of 720X1280 pixels which gives you 321ppi density that is standard in most high end models. It runs on Android 4.2.2 Jelly Bean and is powered by company’s own K3V2 quad core processor that clocks at 1.5 GHz. Although the Huawei processor doesn’t seem as quick as other professional processors the company make up for that by incorporating 2 GB RAM with the device. Ascend P6 comes with 8 GB of storage space and features a micro SD slot for expandable memory of up to 32 GB.

The Smartphone has an 8 megapixel primary camera with BSI sensor but the company pumps up the volume by putting a whopping 5 megapixel front facing camera. The device is loaded with other cool features like default Emotional UI keyboard which lets you type with ease. Ascend P6 also has a control button that lets you set the temperature of your display screen.

The Chinese mobile company has been digging the Indian smartphone market from septemeber when first they launched two mid range models and a phablet Ascend Mate in India.  Both of Huawei’s mid range smartphone Ascend 610 and Ascend 700 are available at online retailers for aroung 12,500 to 16.500 rupees respectively. The Phablet model Ascend Mate that has 6.1 inch display screen is available online for about 23,500 rupees.