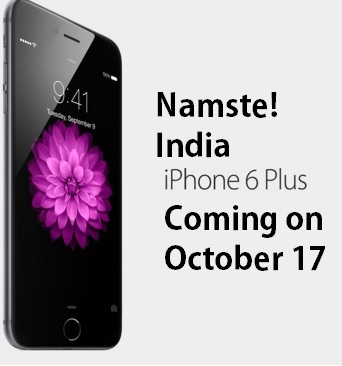 Ask any Indian why he likes Android better than Apple and the most common answer would be, Android have big screen that Apple not but newly launch 5.5 iPhone 6 Plus may change that. Undoubtedly, Indians love big screen smartphones and that obsession played a big role in making Android Phablet a success in the country. Further, Android’s freedom to endless apps and expandable memory options helped Android bloom in the Indian market.

Apple on the other hand remained an elite class brand and misconceptions like “nothing comes free in App Store” and “iPhone doesn’t let you copy data from other OS played big role in limiting Apple’s reach. Although, last year Apple successful broke free from its stereotype image  it still had a lot catching up to do in the Indian market as its phablet market was nil until recent arrival iPhone 6 Plus. Sensing the opportunity though  unlike last time Apple was quick to announce October 17 as the launch date of its new iPhone 6 and iPhone 6 Plus in India.

For long, Android leader Samsung has dominated Indian phablet market with its Note series phablet that feed “Bigger is Better” attitude. To top the case Samsung packs top notch specs and deliver one of the best Android experiences with the help of its UI Touch Wiz. But now that Apple has a worthy contender in the phablet market Samsung may begin to notice a swift.

While pricey Apple might not be a choice for budget conscious Indians but iPhone 6 is going to be a hot pick among professional and business owners who want to make a statement.

Sales of iPhone 5s in the Indian market last year has cleared the air around Apple’s old image of being a a brand that only US returned Indians desire to buy. The high sales number may have also hinted Apple that it can no longer ignore one of the biggest Smartphone market, India.
One down side of iPhone 6 Plus though is its only 8 megapixels iSight camera that will have tough time competing with the likes of Samsung, Sony and HTC that offer almost double megapixels camera. However, Apple offers iPhone 6 and iPhone 6 Plus in 16, 64 ans 128 GB options the absence of micro SD card for expansion is going to make a switch difficult for Android lovers.